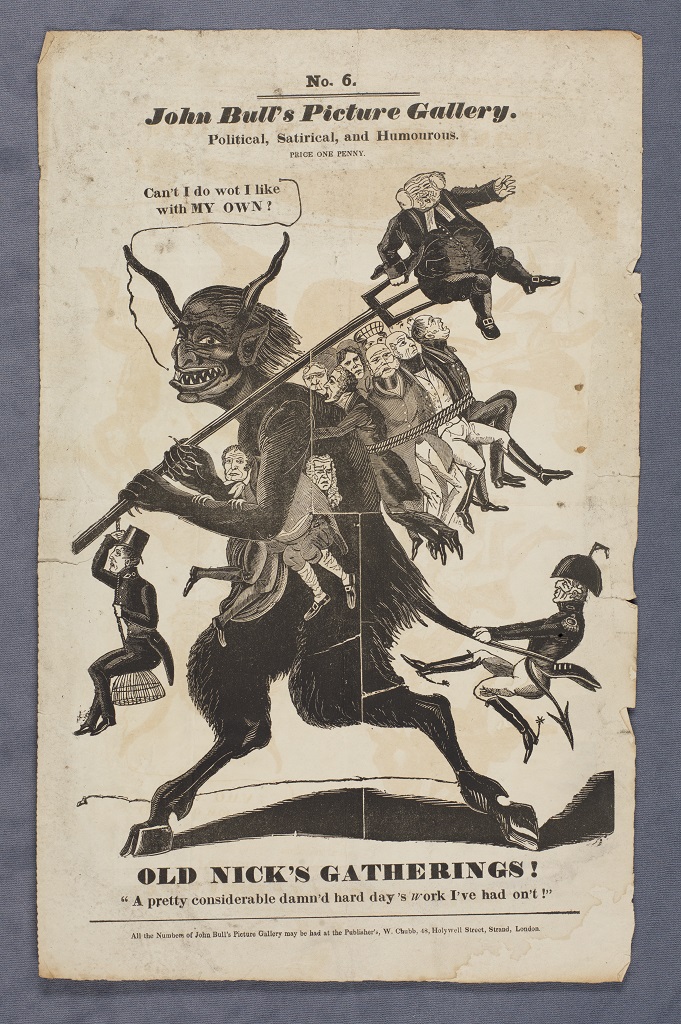 “he Devil, laden with Tories, strides to the left, quoting the Duke of Newcastle with a gloating grin: ‘Can’t I do what I like with MY OWN’ [see BM Satires No. 15884, &c.]. Across his shoulder is a trident on which a bloated bishop is spiked. From the lower end of the handle a rat-trap (see BM Satires No. 15734), on which Peel sits, hangs by a rope. Wellington, encircled by the barbed tail, is dragged along, kicking violently. He is in uniform with spurred boots; a gibbet projects from his cocked hat. Under the Devil’s arm are two lawyers: Wetherell in his slovenly dress, and Lyndhurst. The remainder are tied by ropes to the Devil’s back; most prominent (left to right) are Ellenborough, Cumberland, Gloucester, and Croker. The others are scarcely characterized; a Scots cap may denote Lauderdale, a renegade.”–Britism Museum online catalogue. 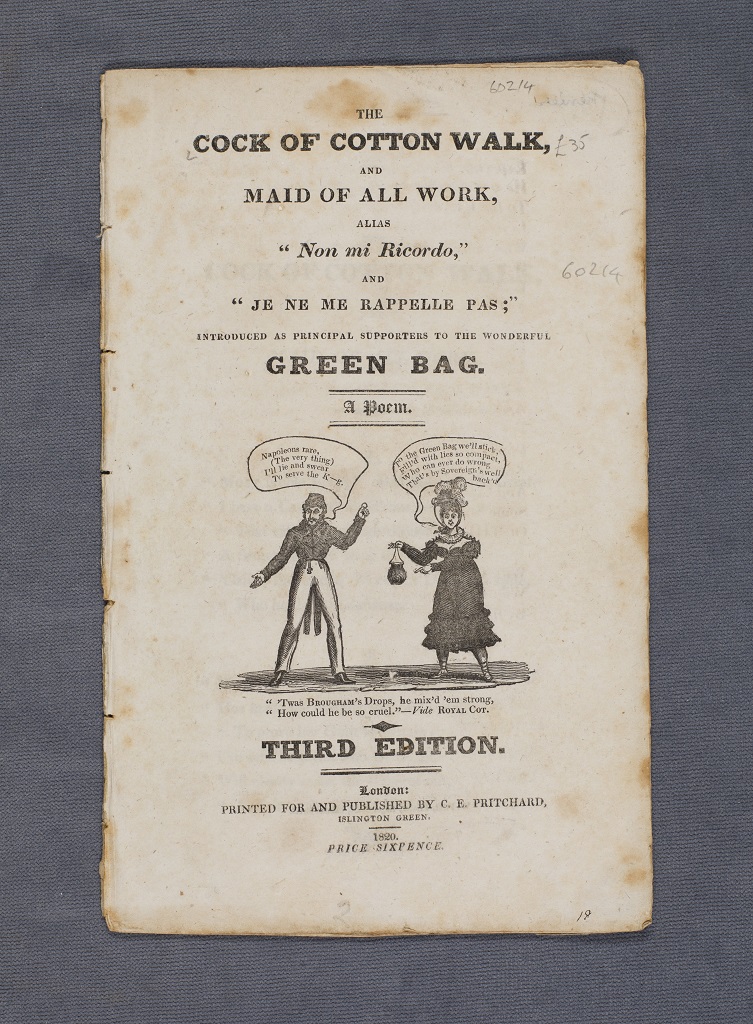 Relates to the Italian witnesses at the trial to deprive Caroline of the style of Queen and the rights of Queen consort.

Emaciated and shaven-headed paupers treated as slaves by cruel overseers: adults beating hemp and children picking rope in the foreground, others in the background manacled to the wall or hanging from the ceiling, tied up by their feet and hands; to right, a manager with a scourge seizing an elderly man, and a man pulling a cart, which he says is full of dead infants to be sold to surgeons; to left, a manager turning away the starving poor who beg to be let in.”–British Museum online catalogue. 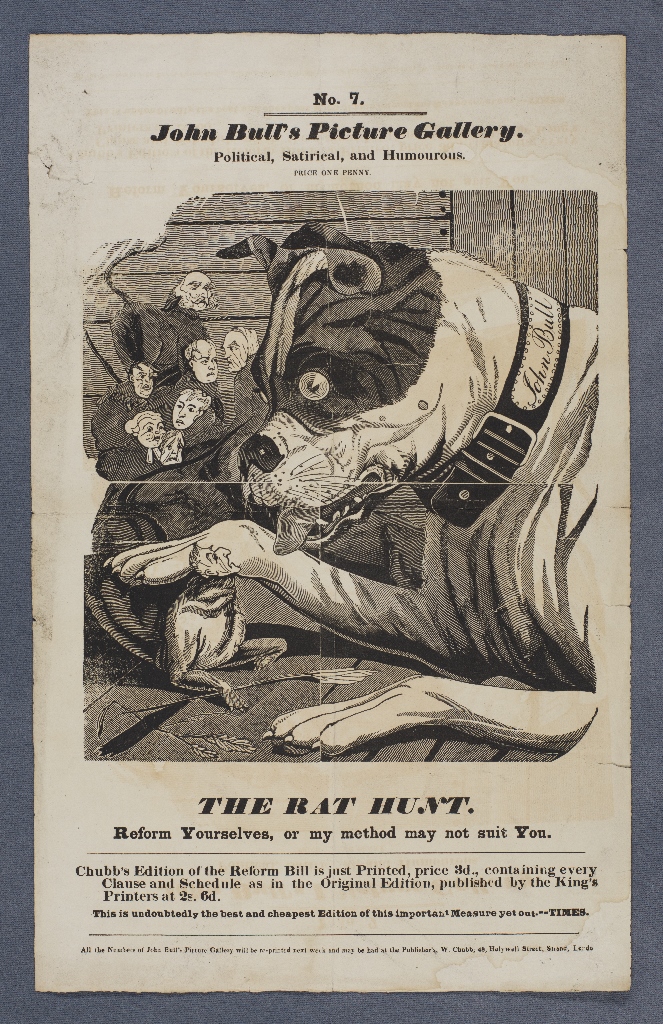 “The head and shoulders of the dog, who has a handsome collar inscribed ‘John Bull’, project into the design from the right. One paw presses down a rat with the head of Wellington, who looks up in anguish at the dog’s angry jowl. Behind are other frightened rats with human heads: a bloated bishop, Peel, Wetherell, Eldon, Cumberland, and two others. The rats have been robbing the barn of ears of wheat.”–British Museum online catalogue. 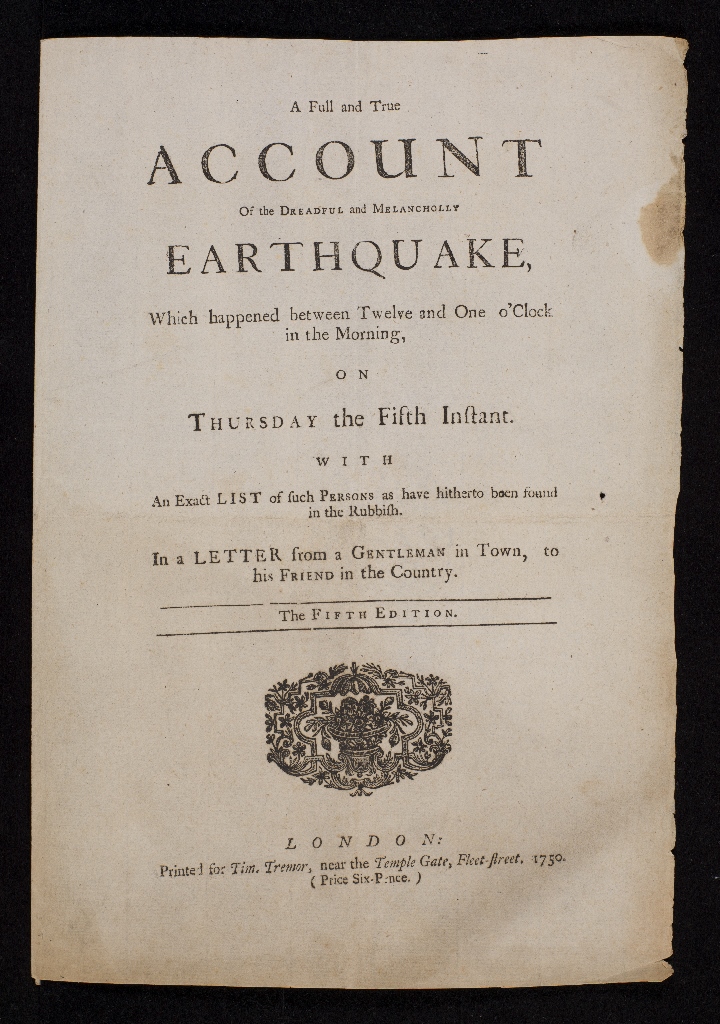 A satire.
The imprint is fictitious.