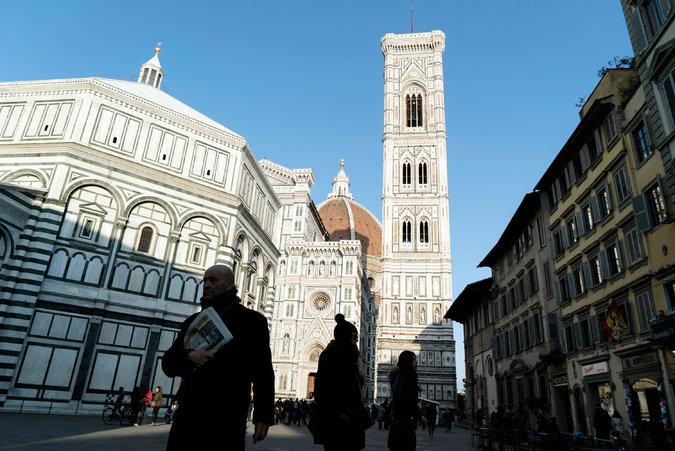 The dome of the Santa Maria del Fiore cathedral, better known as the Duomo, and Giotto’s bell tower, the Campanile, in Florence, Italy. Credit Alessandro Grassani for The New York Times

FLORENCE, Italy — “Do not write on the walls,” reads the message on a Renaissance stone wall in the cathedral on this city’s central square.

Unfortunately, the instruction, scrawled in black marker, was the defiant graffiti of a visitor who had decided to mock the plastic sign just above it by saying the same thing.

The official missive, on a wall at the end of a steep staircase leading up to the dome of the Santa Maria del Fiore cathedral, better known as the Duomo, had clearly failed in its mission.

Elsewhere, tourists through the decades had defaced walls and other parts of the monument with declarations of eternal love, political slogans, spontaneous feelings and frustrations or other, generally inane, musings.

“I hate the stairs,” read one.

“Cate, I want to marry you,” another proclaimed. Or at least that was the stated desire back in November 1999.

Very recently — Feb. 28 to be precise — “Jackie+Denise,” a couple from New Jersey, decided to make sure the world knew they had visited Florence’s bell tower, designed by one of the pioneer artists of the Renaissance, Giotto di Bondone. They wrote their names in dark red pencil on the 18th-century bronze bell.

For years, officials in Florence have tried to discourage visitors from around the world from using this city’s old stone walls as a time capsule for such musings. But the human urge to generate graffiti, it seems, is a powerful instinct, difficult to tame. 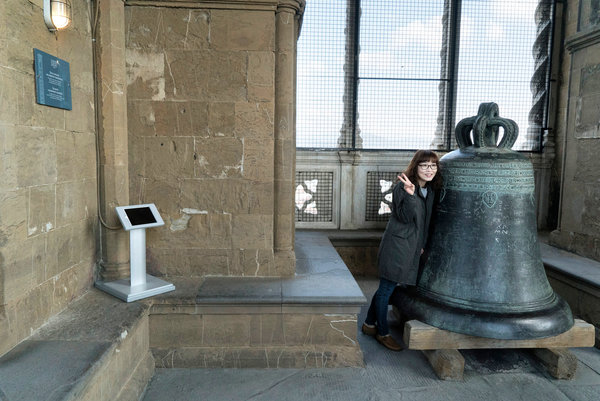 A tourist in Giotto’s bell tower this month. Officials concerned about graffiti have placed three computer tablets there in the hope that visitors will leave their marks virtually instead of on the monument’s walls. Credit Alessandro Grassani for The New York Times

So the officials have decided to try a digital solution to their age-old problem, starting with Giotto’s bell tower, the Campanile.

Having finally cleaned up all the walls along the 414-step climb to the bell tower this year, officials have placed three computer tablets there, hoping visitors will leave their marks, virtually, without damaging the monument itself.

Messages will be stored on a website and archived, for eternity, online.

Any other mark will be removed swiftly, a large billboard at the entrance of the bell tower explains in Italian and English.

“We needed something to act as a deterrent against new graffiti, once all the walls were clean, and we hope that this app will do that,” said Alice Filipponi, the social media strategist at the Opera di Santa Maria del Fiore, the institution that oversees Florence’s Duomo complex.

“Our goal was to let people leave their testimony without smearing the walls again,” Ms. Filipponi said.

It took Beatrice Agostini, the institution architect who manages and maintains the site, three months with a team of nine restoration experts to clean up the walls in the tower using solvent gels and lasers. The task is not one she and her team want to repeat, especially since various parts of the cathedral, where graffiti markings remain, must still be cleaned.

“We want to tell people that a mark is not only an eyesore, but it’s a real damage to the monument,” she said. “Removing the different writings is a problem. On marble it’s almost impossible; a ring stain remains forever.”

She added, “We can’t put cameras everywhere, the space is so narrow, so we thought that providing an alternative was our best bet.” 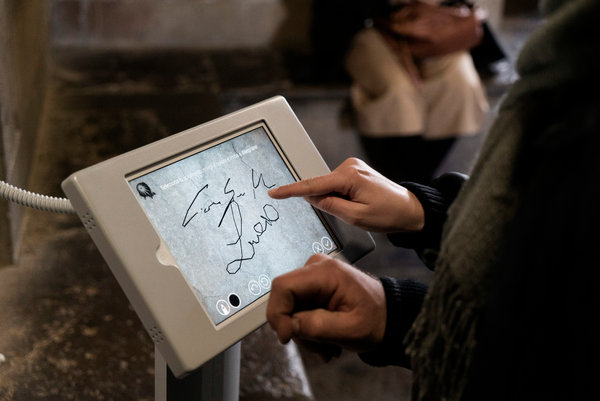 Tourists left a virtual message on one of the bell tower’s tablets. Credit Alessandro Grassani for The New York Times

It’s a bet the two women seem to be winning in the bell tower. In the first three days of their experiment, there were more than 3,000 visitors, 304 digital messages — and no new graffiti scrawls.

With virtual graffiti, visitors can select the background they want to write on: wood or marble, iron or plaster — like that found in the monument. Then, with their tool of choice, from lipstick to spray paint, they are able to use their fingertips to etch symbols, names and messages.

Users are asked to leave their email addresses so that once their messages are approved, they can receive notice of publication.

In years to come, the messages may be printed and included in the paper archive of the Opera di Santa Maria del Fiore, whose documents date back to 1296.

“Whether we manage to educate people remains to be seen,” said the institution’s president, Franco Lucchesi. “But as of now, our Internet is full of messages, and the walls are not. We can therefore say that it’s working.”

Still, the problem has defied solutions before, and is certainly not a new one. One of the engravings on top of the tower bell is from 1899.

“I hope it will work out, but based on my experience, there is no definitive solution to these actions,” said Giorgio Moretti, president of a Florence-based urban volunteer group, the Angels of Beauty, which has been cleaning up the historic city for years.

“Any initiative is important, and this is a very nice project, but it’s equally important to constantly remove the marks,” he said.

In Italy today, marking up walls or monuments is punishable by fines or even jail sentences, based on the extent of the damage and the building involved.

In Florence, the battle to protect monuments from compulsive scribblers as well as from vandals goes back decades, but it has intensified in recent years. In 2015, the cathedral churchyard was equipped with an alarm system and a camera after janitors arrived to find new writings nearly every morning.

Some have confessed to their misdeeds. Mr. Lucchesi recalls the “pilgrimages” of a Japanese class coming to apologize for the damage done by students — three years in a row.

“The fact that the monument is so clean also helps,” said Laura Bachmann, a 21-year-old from Germany who was visiting Florence with a friend. “None dares to be the first one to dirty it up.”

To the experts, that cleanness is the main deterrent. “Vandals do it where everyone can see their mark. Unfortunately I fear it’s not a tablet that can prevent recidivism,” Andrea Amato, president of Italy’s National Anti-Graffiti Association, said about the effort in Florence. “Cameras don’t hamper graffiti; entire walls available for graffiti writers have not impeded them to dirty up elsewhere.”

He added: “But it’s important that we don’t abandon our monuments to degradation. If we clean them, it’s psychologically harder for people to smear them up again.”

Experts said it might be hard to replicate the Florentine project outdoors or on city streets.

It may work best in controlled spaces, like in monuments or museums or other spaces that can also offer the incentive of an archive where the scribblers’ children can read their parents’ messages online in the future.

“It’s a nice way to leave a mark,” Anaïs Pezet, a 21-year-old architecture student from France, said after using a tablet to design her logo and then a mouth with red lipstick on a virtual marble surface at the top of the bell tower.

“Everyone wants to leave something behind where they go,” she added. “The difference here is that you can leave a digital mark. They allow you to be respectful of the art.”