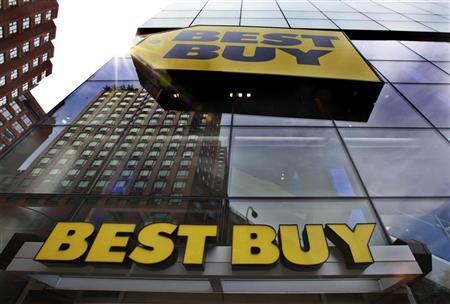 A building is reflected in the glass of a Best Buy store in New York August 21, 2012.
Credit: Reuters/Brendan McDermid
By Dhanya Skariachan

(Reuters) – Best Buy Co Inc is planning to sell its own tablet, the Android-based “Insignia Flex,” for $239 to $259, a source familiar with the matter told Reuters, pitting the world’s largest consumer electronics chain against the likes of Apple and Amazon.com Inc.

The Insignia Flex is intended to go toe-to-toe with Amazon’s Kindle Fire HD tablet, Google’s Nexus 7, and a slew of other Android tablets from Google and Samsung. A smaller and less expensive version of Apple’s populariPad tablet is expected to be unveiled next week.

Best Buy’s in-house brand Insignia shared details of the new tablet on its Facebook page late last week, but has so far kept silent on the price tag, a crucial weapon on the intensifying tablet and mobile device battlefield.

Best Buy has used its in-house brand in the past to cater to customers looking for less expensive versions of everything from high-definition TVs to Blu-ray players.

The Insignia Flex will hit stores on November 11 and be sold only at Best Buy, the source said on condition of anonymity because the details were not yet public.

The Insignia Flex is based on Google Inc’s Android software, which also powers Samsung’s tablets, and features a dual-core 1GHz processor, 9.7-inch screen and 10-hour battery life, according to the Facebook page.

It will also feature a camera for video conferencing and weigh in at about 1.45 pounds, the source said.

The pricing compares with a starting price of $499 for Apple’s 9.7-inch iPad and $399 for the older version of iPad . Amazon’s Kindle Fire HD and Google’s Nexus 7 are each priced at $199.

Best Buy’s launch of its own tablet does not mean it will not carry rival devices, the source said. Last month, retailer Wal-Mart decided to stop selling all Kindle products. Target took a similar decision earlier this year, acknowledging the growing threat from its online rival.

Best Buy, on the other hand, has tried to position itself as a destination for tablets, carrying a wide variety of the mobile computing devices.