Gem of the Ocean, is the first play of August Wilson’s famed “Century Cycle,” a series of ten plays chronicling black life over the course of the 20th century. This talk considers how the play positions blackness fundamentally in the water, imagining blackness as an ongoing inhabitation of the deep haunted by Middle Passage. But far from what black studies sometimes finds occasion to theorize as black “social death,” I uncover how the play pushes us to reconsider Middle Passage as the origins of uniquely black practice of ecological life on a blue planet. 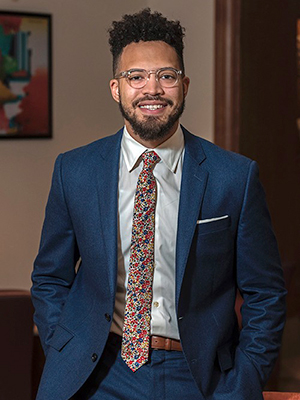 Dr. Jonathan Howard is an Assistant Professor of English and African American Studies at Yale University. His research and teaching broadly interrogate western ideas about race and nature, weighing their entangled contribution to the formation of a modern world in ecological peril while also exploring black expressive culture as an alternative site of ecological thought and practice.

Dr. Howard is an African American literary scholar whose research places the literary and intellectual traditions of the African Diaspora in conversation with the environmental humanities. He is the recipient of numerous fellowships and awards, including generous support from the Fulbright Program, The Institute for Citizens and Scholars (formerly the Woodrow Wilson Foundation), The Andrew W. Mellon Foundation, and the Harrington Fellows Program. His articles can be found or are forthcoming at Callaloo, Souls, and Atlantic Studies. His current book project, Inhabitants of the Deep: The Blueness of Blackness, illuminates the abiding relationship between blackness and the oceanic by undertaking a black ecocritical study of the trope of water in African Diaspora literature. It argues that the blackness which dawned in the oceanic encounter of Middle Passage constitutes not social death, but ecological life. This black, which was first blue, indexes a global species event, whose expressive legacy harbors an ecological recalibration of human being on a blue planet.

Dr. Howard teaches undergraduate and graduate courses in African American literary studies, black studies, and the environmental humanities. His teaching surveys the literary, expressive, and intellectual traditions of the African Diaspora as a crucial reserve of environmental and ecological thought. Above all, and in deep collaboration with his students, his courses aim to facilitate the phenomenon of “black study.” That is, to attend, again and again, in literature and more, to black death and life, to no smaller end than the end of the antiblack world and the celebration and magnification of black life on earth.

Dr. Howard earned an M.A. and PhD from Duke University and a B.A. from the University of Pennsylvania.