Why are some people willing to initiate protest against authoritarian regimes?  How does repression affect their willingness to act?  Drawing on data from the Arab Spring protests in Morocco, this paper argues first that activism is passed down from one generation to the next: first movers often came from families that had been punished for opposing the regime in the past.  Second, repression during the Arab Spring was also counterproductive: those connected to first movers via Facebook supported renewed pro-democracy protests when informed of the regime’s use of repression in 2011.  A regime that jails and beats political dissidents creates incentives for its citizens to oppose it; these abuses can come back to haunt the regime long after repression occurs.

Imperial Rule and the Politics of Nationalism: Anti-Colonial Protest in the French Empire.   Cambridge University Press, 2013.

Nationalism is frequently described as a wave that swept the colonized world, a ubiquitous force that characterized politics and identity in places ruled by empires.  A central goal of this book is to call into question the notion that nationalist mobilization was an obvious response to colonial rule. Nationalist mobilization in the colonial world was not omnipresent, nor was it easy to organize given the existence of a powerful authoritarian state. Studies that take nationalism in the colonial world for granted fail to account for widespread variation in the ways that populations responded to imperial rule. Drawing on cases from the 20th century French Empire, this book examines opposition to colonial rule and explains how and why nationalist movements began challenging French colonial rule. 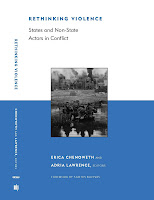